Mining operations have caused continuous heavy metal pollution for over a century, compromissing the integrity of the Zêzere river, that provides drinking water to the Lisbon metropolitan area. Authorities have allowed the disannexion of former mining sites from the current concession without restoration and continue to tolerate ongoing pollution. 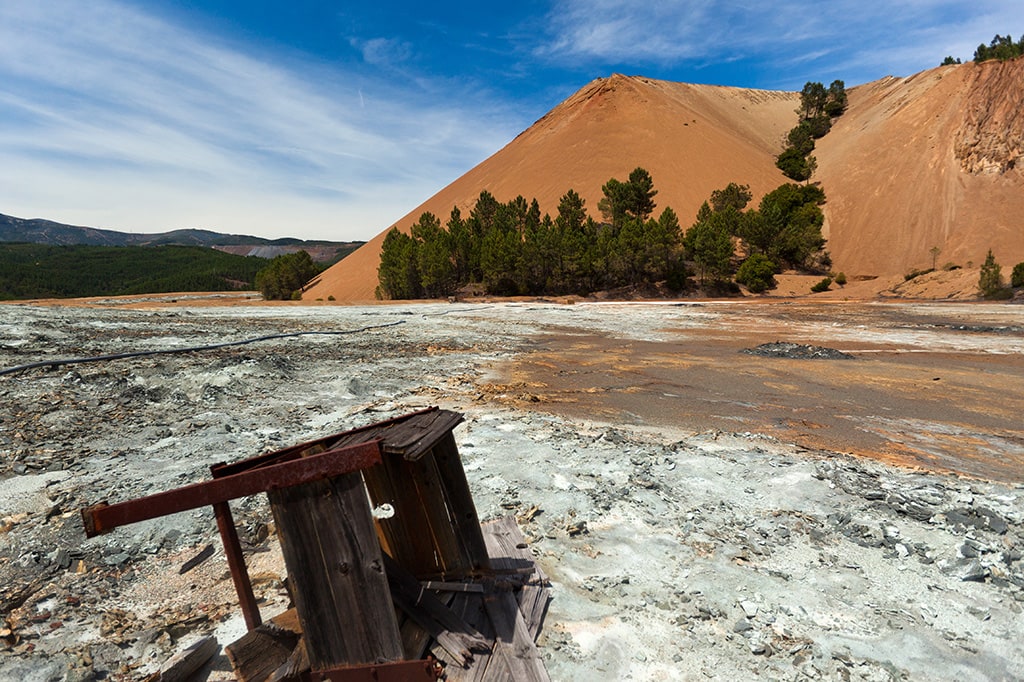 The Panasqueira mine has historically caused heavy metal pollution in the Bodelhão and Zêzere rivers, and continues to do so as a consequence of acid mine drainage. Levels of copper, cadmium, zinc, arsenic and other metals cause significant impacts on stream ecosystems, as well as damage to agricultural land, especially during flooding events.

Heavy metal pollution is derived both from dewatering underground works and from leaching from the large waste piles. The water treatment system relies on neutralization with lime and has proven ineffective. Part of the waste piles located in Cabeço do Pião (River) have been abandoned without any effective treatment and represent a high environmental risk. These piles have an average arsenic content of 15%.

In the Zêzere River there are three strategic reservoirs for the supply of water for human consumption, including the Castelo de Bode reservoir, which supplies water to the municipality of Abrantes and the Lisbon metropolitan area through the Empresa Portuguesa das Águas Livres (EPAL).

Pollution with heavy metals has especially affected local populations and mine workers, inducing genotoxic damage and higher incidence of cancer, particularly by exposure to arsenic. Despite the existence of several scientific studies pointing to the evidence, authorities have not admitted these results. Local populations have also made complaints about noise pollution. 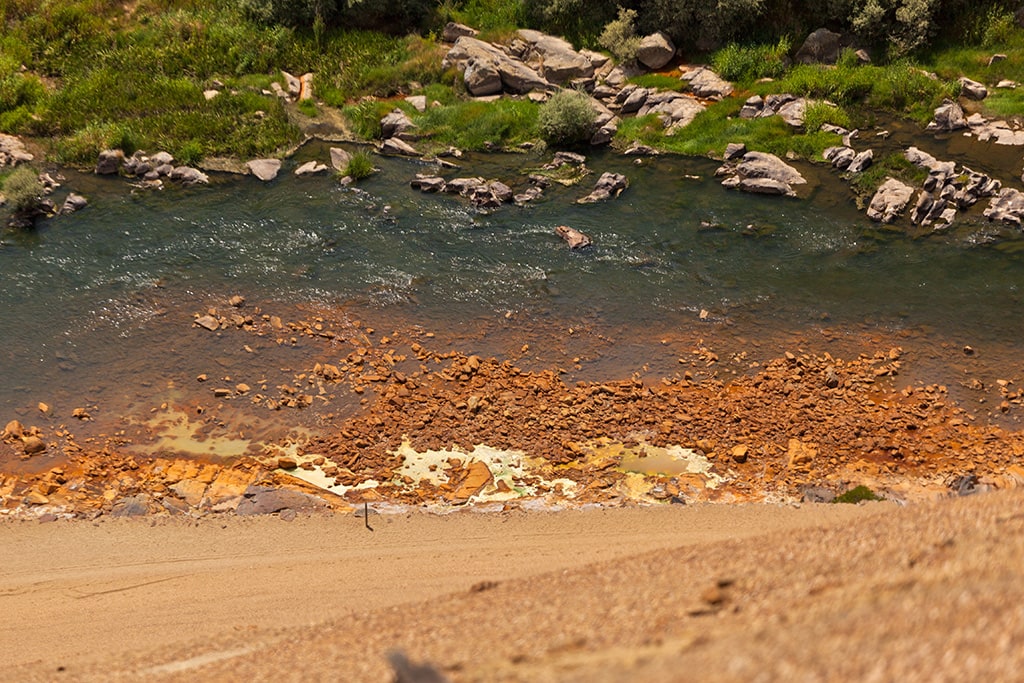 Cabeço do Pião Acid Mine Drainage into the Zêzere River, 2019 Miningwatch Portugal

In 1992 the mining concessions were grouped into one, with an area of 19 km². After a decade of abandonment by the company, in 2006 the part of the concession that included the 'River' area in the Cabeço do Pião site was disannexed, leaving behind and unrestored enormous environmental liabilities. The move was authorised by the mining administration (DGEG), that signed an agreement that removed the site, and all associated environmental liabilities, from the Beralt concession. In an opaque manoeuvre, the land was transferred to the Municipality of Fundão, which was unable to take responsibility for the ongoing environmental impacts.

In 2011 Beralt presented a 'Closure Plan and Environmental Plan for Landscape Recovery of the Panasqueira Mine', but the document was not subjected to public consultations nor is it publicly available. The Portuguese Environment Agency granted an environmental licence and wastewater discharge licence in 2017. 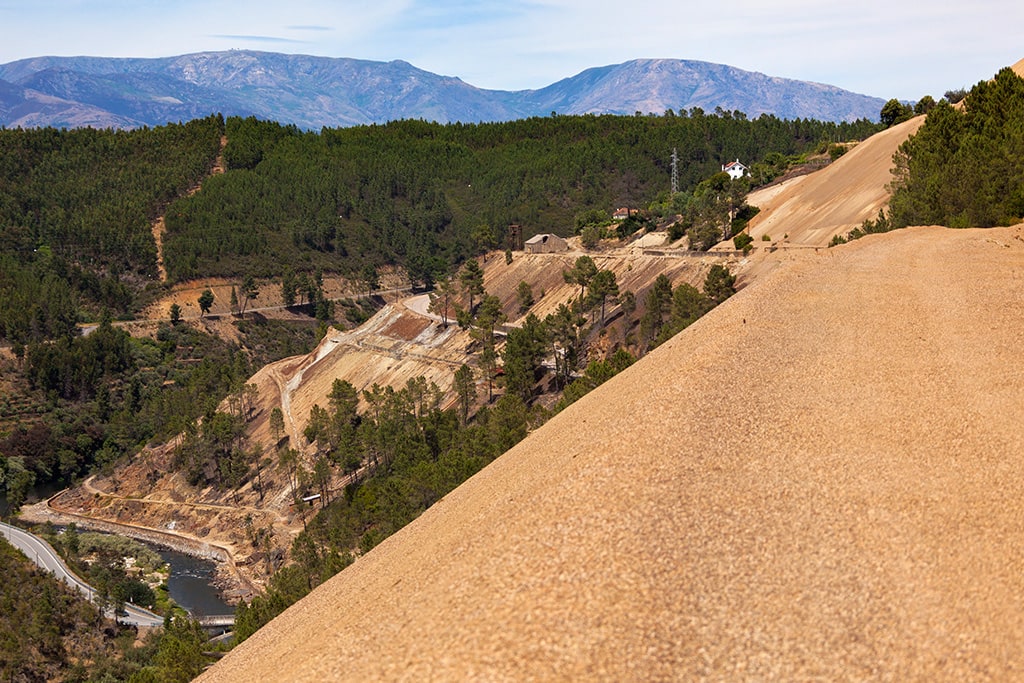 View of the abandoned tailings site at Cabeço do Pião with the Serra da Estrela in the background, 2019 Miningwatch Portugal

In 2011 a public-private partnership Centro de Atracções Mineiras S.A. was established to promote the 'Projecto Rio', which was highly criticized as being a 'Eurodisney for toxic waste'. In 2020, the Secretary of State for Tourism invested €1 million in a route called 'Lands of Tungsten and Tin - History and Memory of Mining Communities.'

In 2011 Beralt presented a 'Closure Plan and Environmental Plan for Landscape Recovery of the Panasqueira Mine', but the document was not subjected to public consultations nor is it publicly available. It is unknown whether it also excludes the environmental liabilities of Cabeço do Pião.

The Mining Industry Workers' Union (STIM) has denounced the hindrance of union activity as well as the lack of hygiene and safety. In 2020 the Authority for Working Conditions condemned Beralt to return the amount deducted from the wages of miners who participated in a workers' plenary, while in 2017 the Labour Court condemned the company to reinstate the payment for night work. Accidents, including fatal ones, have been frequent (2001, 2005, 2010, 2011, 2012 2015, 2016).

Beralt was a member of the Local Action Group of the REMIX Smart and Green Mining Regions of EU Interreg project. It was also part of several projects funded through the Horizon 2020 ERA-NET Confund on Raw Materials (ERA-MIN), including CELMIN, NewOres, BIOCriticalMetals and REVIVING.

Environmental NGOs have filed complaints to the State environmental inspection agency (IGAMAOT), but no sanctions appear to have been imposed.

Ongoing pollution to the Zêzere river has also been brought to the attention of the Portuguese parliament by various political groups, including BE, PCP and PAN, and to the European Parliament by CDS-PP.